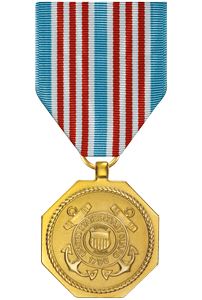 POROO, Jacob Lauri Arthur, Hospital Corpsman First Class, USCG (Posthumous Award)
Date of Action:  02 June 1968
Date of Award:  10 August 1968
For heroism on the morning of June 2, 1968 when he entered a burning cabin to attempt a rescue on Adak Island, Adak, Alaska.  When fire erupted about 3:30 a.m. engulfing the doorway of the old recreation building, Petty Officer POROO, together with seven other men, successfully escaped.  Hearing shouting and believing it to be a cry for help form a trapped companion, he unhesitatingly re-entered the flaming cabin to render assistance with complete disregard for his own safety.  Petty Officer POROO received second and third degree burns over 75 percent of his body before he finally left the burning building, assured that his companions were safe.  He then calmly gave sound medical advice to his injured companions until help arrived.  Petty Officer POROO later succumbed to his injuries.  His outstanding courage, intrepidity, and unselfish actions were in keeping with the highest traditions of the United States Coast Guard.

The intention of this site is to document the role of the U.S. Coast Guard in the support of the U.S. Department of Defense Radio Navigation program, in particular LORAN. This site is not affiliated with any United States government agency, foreign government or a private entity. All inquiries may be sent using contact us on the home page.